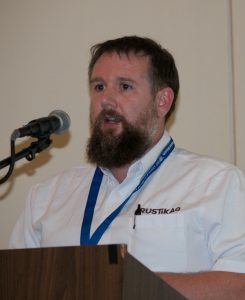 Peredur Owen Griffiths was born in the Vale of Clwyd but, as the son of a Minister has, lived all over Wales. He graduated from University of Sheffield in 2003 with a Master of Engineering Degree in Computer Systems Engineering and moved to South Wales. He worked in the financial industry for 13 years where he worked as a Mortgage Advisor, Branch Manager and latterly a Business Development Manager for Principality Building Society. In 2015, he joined Christian Aid as the Regional Coordinator for South Wales and Legacy Officer for Wales. He and his wife Angela live in Caerphilly where he is a Community Councillor. He is a Director of Displaced People in Action, one of Wales’s most active asylum and refugee organisations. In his spare time, he is a member of Cor CF1, an internationally acclaimed choir who regularly perform and compete in Wales and further afield. Winning regularly at Eisteddfodau and were the BBC Choir of the Year in 2014. He is also the Operations Director of the International Choral Festival of Wales that aims to welcome the World’s best choirs to Wales.