At its meeting on June 23rd 2021 Rev Simon Walkling was installed as President for the next three years. The ceremony was led by the current President, Mr. Rheinallt Thomas. The service began with a word of prayer by the outgoing President. A portion of scripture was read from Romans 12: 3 – 13 by the Secretary and a prayer was offered by the immediate Past President Reverend Peter Dewi Richards.

The Outgoing President explained that the purpose of the service was to induct the Revd. Simon Walkling as President of the Council for the next three years. After the Secretary attested to the regularity of the appointment the induction proceeded and the new President was invested with his Office gown and medal. The Presidency was transferred.

After the Induction prayer, the new President added his thanks to those expressed by other members for everything that Rheinallt had brought to the role of President. He said Rheinallt had brought his experience in education and chapel life with charm, conviction and a smile to the role. He particularly thanked him for serving an extra year through the pandemic restrictions, when ecumenical meetings had been reduced but engagement with the Welsh Government had increased.

Simon noted that the reading from Romans 12 uses the image of the Body of Christ, and said that the image of Jesus as the vine and ourselves as the branches also expresses our essential unity in Christ and brings fruit to others. He mentioned the important work of the Council in expressing a distinctive nonconformist voice, particularly in the areas of chaplaincy, education and spiritual development.

He thanked members for putting their trust in him to be an effective representative and sought their support in working out how the Council fits in with other ecumenical groups and how local chapels relate to the work of the Council. He hoped that Council meetings would develop ecumenical relationships as well as monitor the work done between meetings. He suggested that we could learn from each other about worship and the discipline of ‘Zoom’, and explore the possibilities of ecumenical working online. 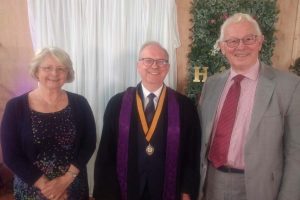